I’ve been on a quinoa kick a lot lately.  I really try to eat it as often as I can.  It is light and fluffy.  It’s not too filling and it has 8 of the essential amino acids that our bodies need which makes it one of the only foods that are a complete protein.

My son is very actively involved in sports and is always looking for MORE protein.  He can work out as much as 6 hours in a day between the 2 sports he’s involved in so it’s important to me that he get the nutrients, minerals and vitamins he needs to stay healthy.

This Roasted Butternut Squash & Quinoa Salad is a great snack for him to refuel.  I personally eat it for lunch along with some other roasted veggies or a side salad.

It is very low in sodium.  It has no cholesterol and is a great source of protein, magnesium and Phosphorus. 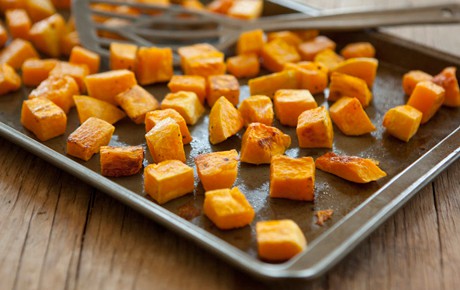 Roasting the squash brings out it’s flavor so beautifully.  The important thing to remember when roasting the squash is to leave enough room on the baking sheet so the squash will roast and not steam.  In other words, don’t overcrowd the pan.

I guess this would traditionally be considered a fall recipe with the butternut squash and the dried cherries.  But I really enjoy this during the summer straight out of the fridge.  But iff turning the oven on during these hot months is an issue, you can always cut the squash into large chunks and grill it.  🙂

The squash and quinoa get tossed together with some slivered almonds, dried cherries and red onion.  The best part is the delicious balsamic vinaigrette that goes on top.  It has some honey in it and Dijon mustard as well.

Let it soak it all up in the fridge for a bit and you can serve it cold or warm.

Recipe Source:  HappilyUnprocessed.com
I used all organic ingredients when possible when making this recipe and hope you do too!  🙂