This homemade turkey broth can be made one of 3 ways ~ as a broth, stock or bone broth.  The only difference is the ingredients used and the cook time, with bone broth taking the longest. 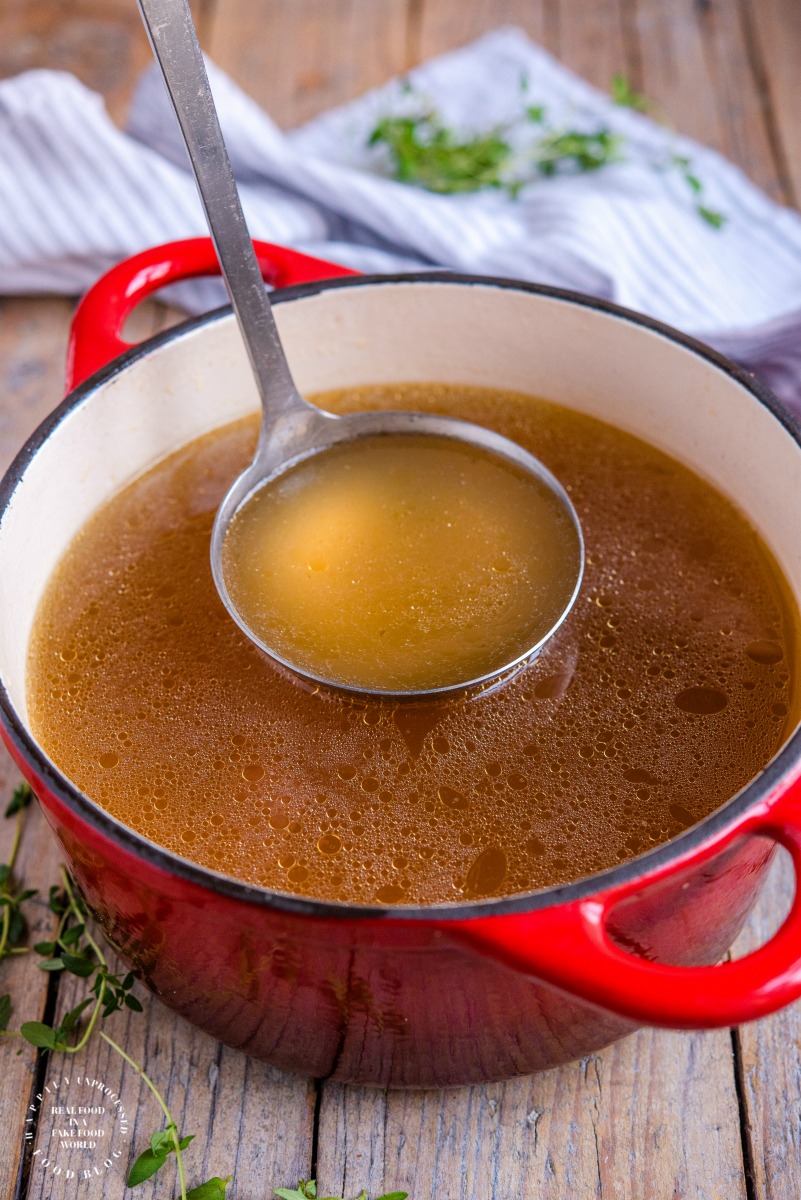 I really hope you saved the leftovers to your Thanksgiving turkey because we are making the best use of those leftovers which helps expand the value of our delicious turkey as well as all those nutrients.

Bone broth is one of the BEST things you can feed your body.  What you typically purchase in the supermarket is a broth.  Prices can range from $1.99 up to a whopping $3.79 for a box of broth, many of them containing natural flavors and almost ALL OF THEM containing yeast extract and sugar.  Not to mention most of these products leave you with a bitter, metallic taste.

The Difference Between Bone Broth, Stock, and Broth

Broth is made by simmering bones in water with vegetables for a short amount of time, under 2 hours.  It is typically seasoned.

Stock is made by simmering bones in water with some veggies for a few hours longer than a broth.  However, it is usually not seasoned and it is not simmered long enough for a gelatin to form.

Bone broth is also simmered with vegetables but for much longer time, usually over 12 hours.   This longer cooking time results in a much deeper color and flavor as well as enough time for a gelatin to form.

You can choose to make any of the above three depending on how much time you have.  Bone broth, in my opinion, is one of the easiest to make because I make it in in the crockpot and not the stove.  Therefore, I don’t have to babysit it.

Once you’ve tried to make turkey bone broth at home, you’ll have the flexibility to customize it. If your turkey has been brined (heavily salted) you may not want to add any additional salt to the stock.

Our broth was very flavorful from herbed butter we put on and under the skin prior to cooking.  However,  keep in mind whether or not your broth has added salt when you go to use it in a future recipe.  As the broth cooks down it will reduce in volume, this will amplify how much salt is in the broth. 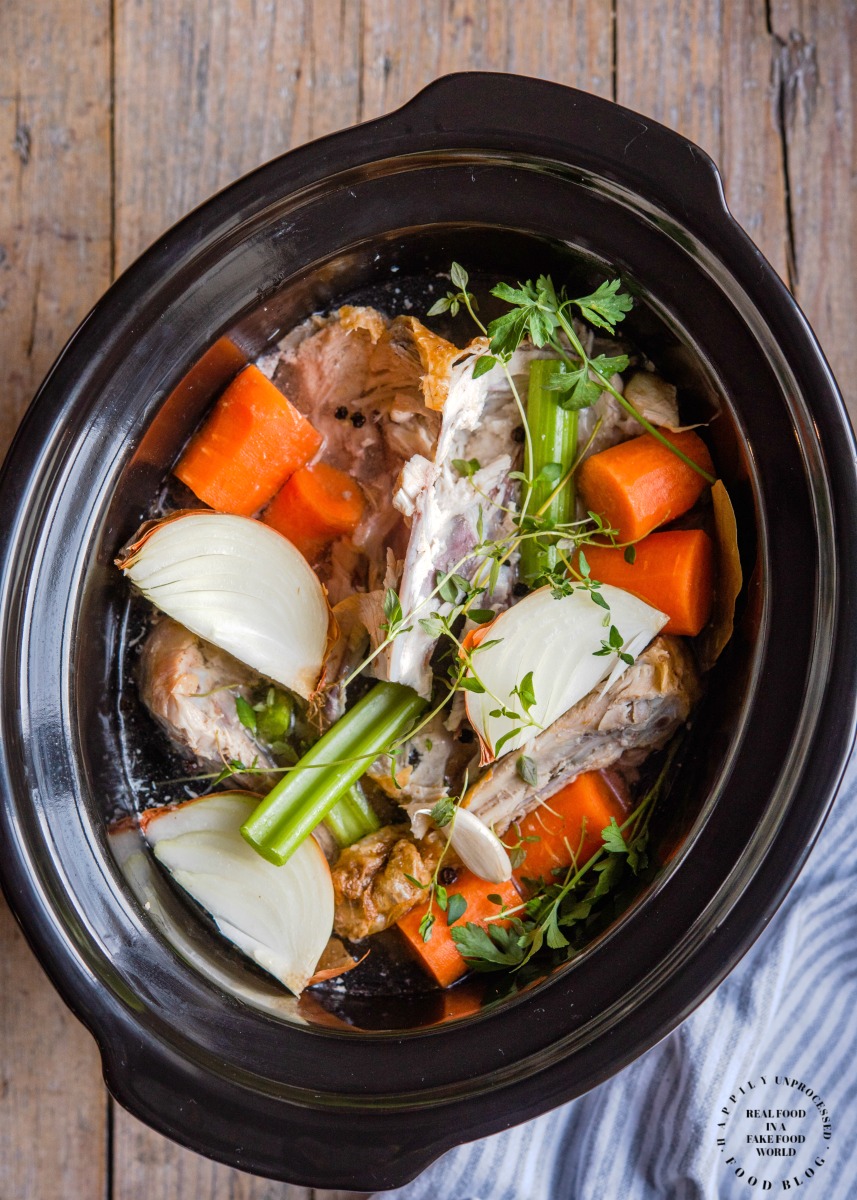 HOW TO MAKE TURKEY STOCK

There should be a film (or gelatin) covering the broth like you see in the picture below.  This is what we are going for!  It is HIGHLY nutritious and I recommend drinking bone broth, either by itself, or making some soups as often as possible. 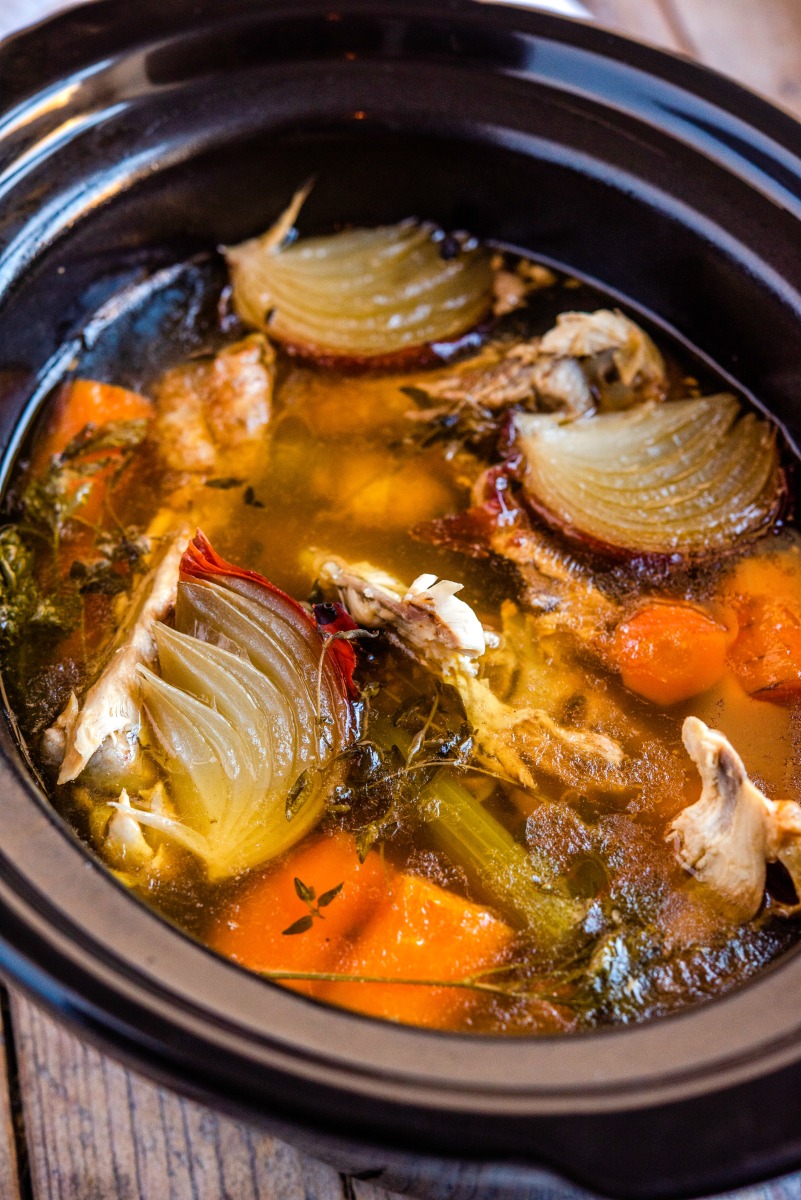 The day before the holiday and all the craziness, grab a gallon size Ziploc bag and put in your onions, carrots, celery, peppercorns, garlic, etc.  Place it in the back of the fridge or the crisper.  Then when the time comes to make you stock, you can throw it all in the slow cooker on Thanksgiving night.

PIN IT FOR LATER!