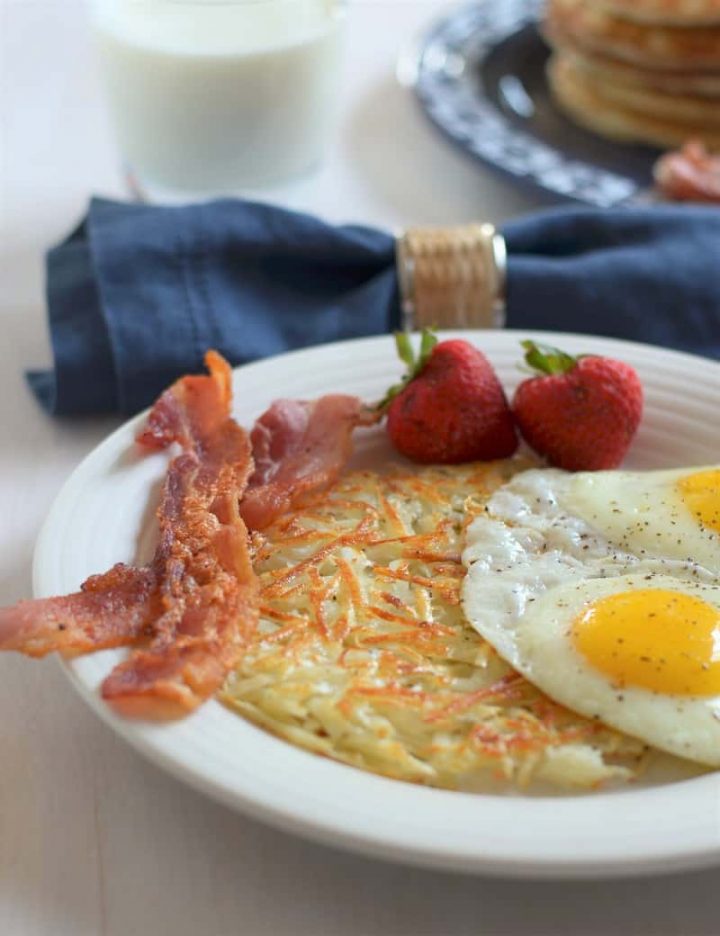 Go to breakfast in any American diner, Coney Island or restaurant and you will most likely be served a side of golden, crispy, delicious hash browns.

There is some debate as to whether hash browns should be diced like in our Homemade Diced Homefries recipe and whether diced potatoes then become Homefries or they keep the name Hashbrows. Well, I like them both ways to be honest.  I like the cubed ones because I can throw some onions and even some peppers in there if I like.

But today I am going to help you get your shredded hash browns golden, crispy and OUT of the pan without sticking.

HOW TO MAKE SHREDDED HASH BROWNS WITHOUT STICKING

There are 2 secrets to getting your hash browns not to stick to the pan:

1.  THE POTATO – First you want to peel and shred your potato.  And we’re not using just any ole’ potato either, we’re using a Russet.  Russet potatoes provide the high starch that’s needed in order for these hash browns to get crsipy.  Other potatoes have too high a water content.  You want to peel the potato and shred it using the biggest holes on the shredder.

Now here’s the important part … ready?  S Q U E E Z E out any moisture using paper towels.  Squeeze and squeeze until the potatoes are DRY.  Potatoes are FULL of moisture so this may take a few squeezes.

2.  COOKING – It’s time to cook our potatoes.  It’s important that your pan is HEATED up.   I turn my stove on medium low BEFORE I even peel the potato (keep in mind I have an electric stove).  As I’m  shredding my pan is heating up.  Food sticks to the pan because the pan is COLD.

Add some oil to a small sauté pan, enough to cover the bottom, 1-2 Tablespoons.   Swirl it around so it’s evenly coated and then sprinkle your potatoes around.  Season them with a little salt and pepper.  Like this …. 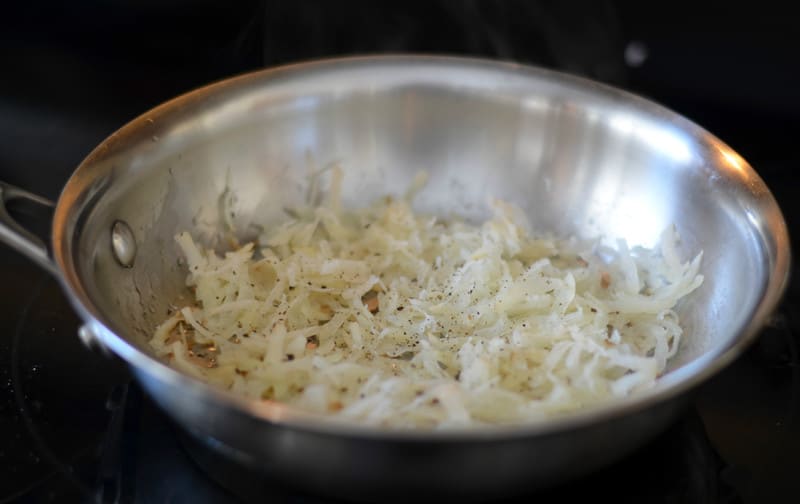 Let it cook over med/high heat for a few minutes until you start to see the edges brown. 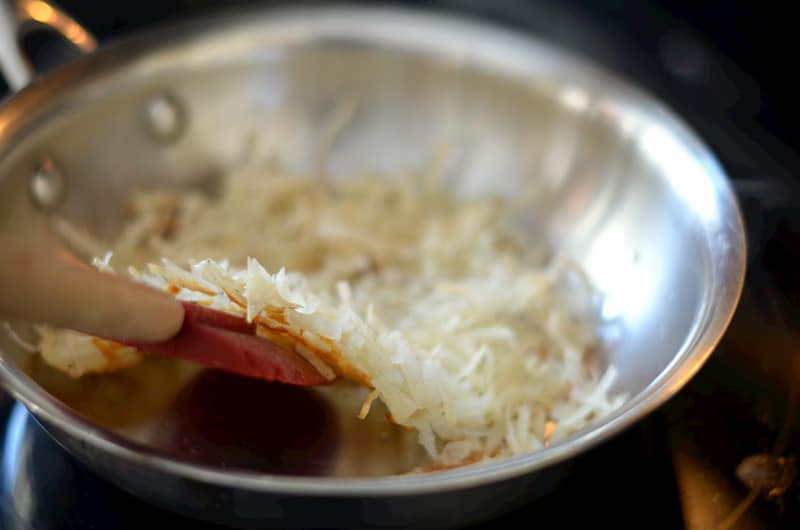 Now if your pan was preheated and there was enough oil, you should be able to go right underneath them and lift them out of the pan.  Like this … 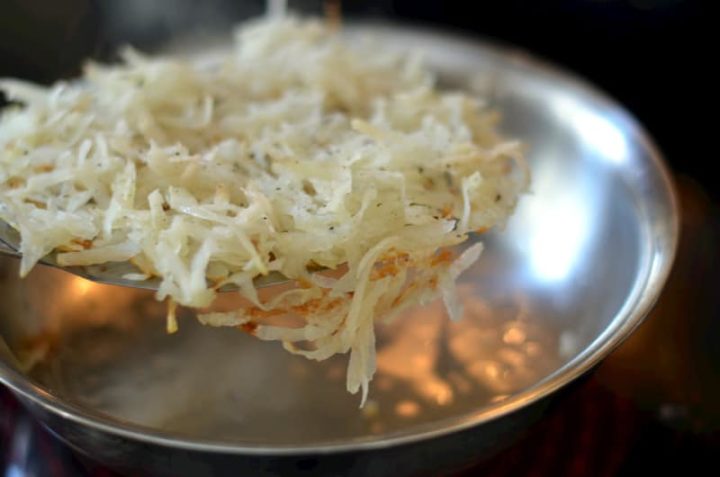 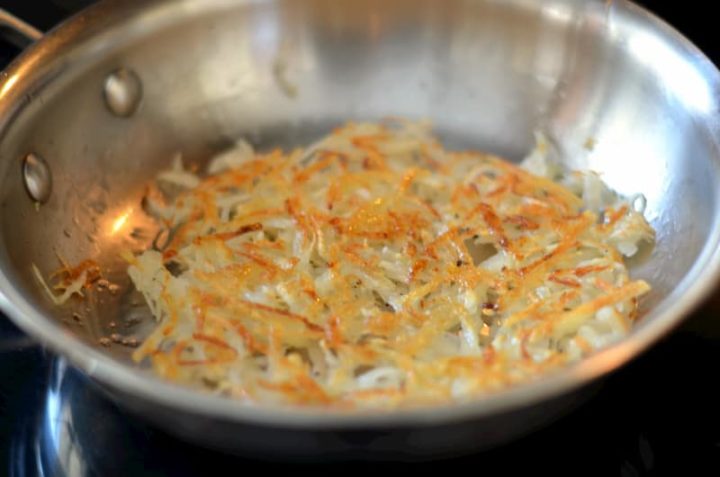 Allow them to cook for a few more minutes on the other side until they are golden brown and you are done! 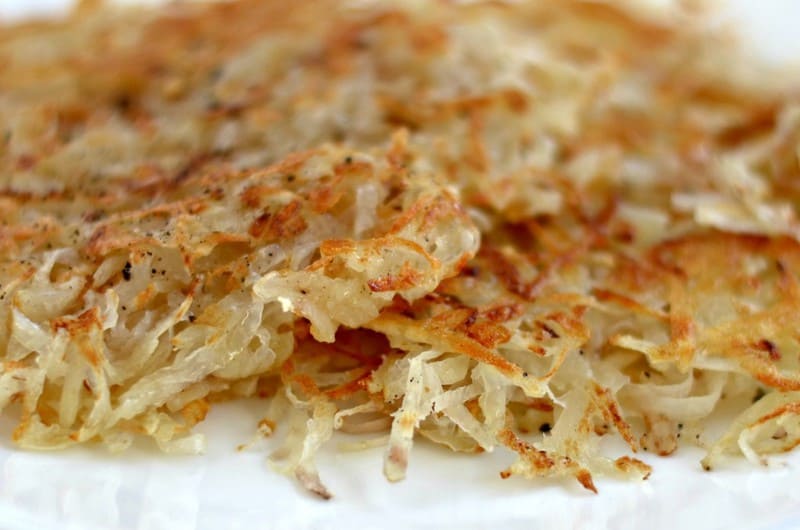 WHAT TO SERVE WITH THIS:
SPINACH and GRUYERE FRITTATA