×
Happily Unprocessed / Recipes / Does your rice need to be organic?

I came across something very interesting today that I wanted to share with you.

Since we have gone unprocessed in 2012 we continue to decrease the amount of foods we eat which contain white flour and white sugar all the time, this means less spaghetti, noodles, and pastas.  I will be open and honest here and say it hasn’t been easy, but at least my family is now open to other alternatives besides refined sugars and flours.

As an alternative we have been turning more towards rice and I am always intrigued at how many variations of rice there are on the shelves.  I just wanted to point out some of the more common ones we see:

Some types of rice

Then I came across this…

So during my meandering of the rice section, I  came across this organic light brown rice by Yoga, which poses a good question …. 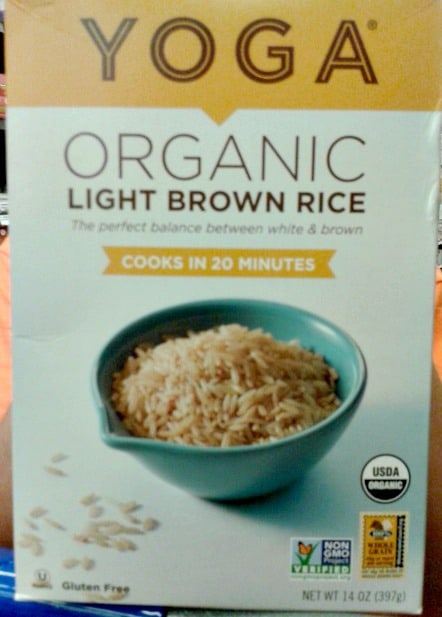 Does rice need to be organic or can you buy conventional?

According to the OrganicPrepper.com and What’s in my Food?, “the pesticide load on conventionally grown rice is tremendous.”

I don’t know a whole lot about rice and how it’s cultivated so I decided to do a little research.

Where does rice come from?

Rice is typically grown in countries with low labor costs and high rainfall, as growing rice is very labor intensive.  It is most commonly grown in Asia and parts of Africa.  The conditions need to be very wet and/or moist.  Traditionally after the seeds are planted the fields are flooded.

Today in America new technology has enabled farmers not to rely on heavy rainfall and mother nature as much by using soil that has a clay base because it has poor drainage.  The rice is then sprayed with fertilizers and pesticides by the plane full.

Regardless of whether the rice is grown in another country or here at home, it will still have detectable amounts of arsenic in it.

Where does the arsenic come from?

Arsenic finds it way onto our rice from several sources:

From a nutritional and fiber standpoint, brown rice is tops, but because its bran remains intact it can also hold on to higher levels of arsenic, according to test results.

The question is are the nutritional benefits of brown rice over white rice worth the arsenic load?

According to Consumer Reports:

“Within any single brand of rice we tested, the average total and
inorganic arsenic levels were always higher for brown rice than for white“.

Can you wash off some of the Arsenic?

While organic rice has not been soaked in pesticides like conventional rice, it’s still not the best thing to serve on a regular basis.  All rice has some level of arsenic on it.

The arsenic cannot be completely removed from the rice through washing or cooking methods – it’s there, inherent in the grain.  It can be reduced though, some experts say by up to 30%, by washing or soaking the rice thoroughly before cooking it.

The Asians cooking method of 1 part rice to 6 parts water, draining well, and then cooking in clean water has been noted to be helpful in reducing arsenic.

While we may argue about the levels of arsenic in rice for another millennium, something else to consider is the booming gluten free market.  There are millions of people affected by gluten these days and the alternative to conventional flours are rice products.

People who have switched from white and whole wheat flours to products that contain rice flours are consuming 2-3 or 4 times the amount of arsenic they had been with regular flour products.

Since my daughter has been diagnosed as gluten intolerant her intake of Rice Chex cereal has quadrupled and that concerns me.

According to Consumer Reports, ready-to-eat cereals, like Barbara’s Brown Rice Crisps had inorganic arsenic levels that ranged from 5.9 to 6.7 micrograms per serving while Kellogg’s Rice Krispies, at 2.3 to 2.7 micrograms, had the lowest levels for the category in Consumer Reports tests.

I came across this from the US National Laboratory of Medicine National Institutes of Health which was published July 04, 2014,

“Celiac disease (CD) may affect up to 1% of the Western population.
It is a disease whose diagnosis has been made mainly in childhood,
but now the profile has changed, with one out of five newly diagnosed
individuals being over 65 years old. The only treatment for this population
is a gluten-free diet. Therefore, the objective of this study was to analyze
the occurrence of arsenic (As) in gluten-free products, basically those
rice-based, intended for celiac adult consumers.

These values indicate that a health risk to these consumers
cannot be excluded. Finally, legislation is  needed to delimit
the safety intake by health agencies and to improve  the
labeling of these special rice-based foods for celiac
adult consumers.

The label should include information about percentage,
geographical origin and cultivar of the rice used; besides and
if companies want  to clearly prove the safety of their products,
the exact content of i-As  should also be included.”

Another important point to note is that rice is the primary staple of many infants diets as pediatricians have been endorsing rice based cereals as they are gluten free and easily digestible by infants.

According to Consumer Reports,

“According to federal data, some infants eat up to two to three servings of
rice cereal a day. Eating rice cereal at that rate, with the highest level of
inorganic arsenic we found in our tests, could result in a risk of cancer
twice our acceptable level.”

What can you do to limit arsenic in your diet?